Interested in Fly Fishing? All You Need To Know Is Here in This Beginners Guide

Fly fishing as we know it today can actually be traced back to English anglers who observed large Brown Trout feeding on Mayflies in their local chalk streams and thus, the best historical record we have of this sport is a treatise called The Treatyse on Fysshynge with an Angle which was written by an English prioress named Dame Julia Berners and which was published in the The Boke of Saint Albens in 1492.

Thus, when an angler chooses to become a fly fisherman, he joins a centuries-old community of like-minded anglers who have chosen to take up this fascinating form of fishing. However, it should be noted that fly fishing is unlike any other type of fishing in that it requires the angler to have both extensive knowledge of the environment he chooses to fish as well as specialized fishing gear. 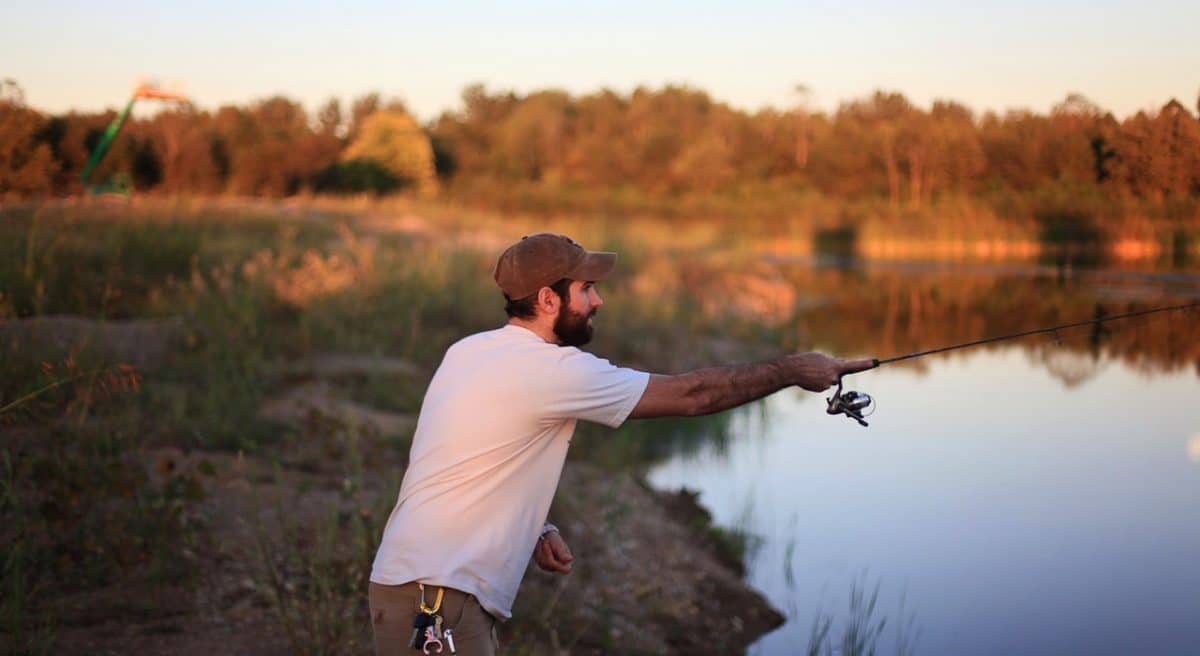 So, the first aspect of fly fishing that you need to be aware of is that it is commonly divided into freshwater and saltwater environments and then, is further divided by fish species. Thus, most fly fishermen think of themselves as either freshwater or saltwater fly fishermen because the techniques and gear that they employ tend to be environment specific.

Therefore, the single most important aspect of fly fishing that you need to be aware of is that because artificial flies are commonly tied on thin, wire, hooks specifically designed to reduce their weight which are then combined with various types of fur and feathers as well as various types of synthetic materials, they have very little weight when compared to a conventional fishing lure and, they also have a significant amount of wind resistance.

Therefore, due to these properties, they cannot be cast in the same manner as conventional fishing lure and thus, they require a weighted fly line to cast them.

In addition, because larger fish often require larger flies to entice them to strike, the larger a given fly pattern is, the more wind resistance it will have and thus, the heavier the fly line that will be required to cast it.

Consequently, fly lines are commonly available in weights ranging from 1 to 14 with a 1 weight being the lightest and a 14 weight being the heaviest and, fly line weights are determined by weighing the first 30 feet of the line in Grains (440 grains = one ounce).

But, you also need to keep in mind that the heavier a fly line is, the less delicately it will land on the water and thus, fly fishermen not only choose their fly line weights according to the size of the flies they will be casting but, they also choose them according to the degree of delicacy that the need in their presentation.

However, it should be noted that this is merely a general rule since Steelhead fly fishermen commonly use a 7 wt. fly rod and fly line while many Bass fishermen prefer an 8 wt. and Muskie fly fishermen often choose a 10 wt.

Furthermore, it should be noted that although artificial flies were originally designed to imitate specific Families of aquatic, freshwater, insects such as May Flies and Caddis Flies, the modern art of fly fishing has grown to encompass both freshwater and saltwater environments as well as both moving water and still water.

On the other hand, Wet Flies designed for freshwater use are designed to imitate mature, adult, aquatic insects that have returned to the water to lay their eggs and then died after doing so and, Streamers are specifically imitate various species of bait fish.

However, it should also be noted that artificial flies are also divided into two other categories consisting of Attractors and Imitators and thus, an Attractor Fly is a Nymph, Dry Fly, Wet Fly, or Streamer pattern that consists of bright trigger colors that are specifically designed to entice fish to strike them even though they do not represent any known species whereas, Imitator Flies generally consist of much more subdued colors and are specifically designed to not only imitate specific Families of aquatic insects and baitfish, they are often designed to closely imitate specific species.

Therefore, like fly lines and fly rods, artificial flies are also available in a wide range of sizes which commonly range from size 6/0 to size 28 with 6/0 being the largest and 28 being the smallest.

Last, you need to be aware that in addition to the fact that fly lines are designated by weight, they are also designated by type and taper. Thus, all fly lines are either designed to float on the water’s surface or sink beneath it depending on the type of fly a fly fisherman chooses.

Furthermore, sinking fly lines are commonly available in different sink rates which are measured by the number of inches per second that they sink.

Thus, when a fly fishermen wishes to fish just beneath the water’s surface, he might choose a sink-tip line which consists of a floating line with a 5 foot, 10 foot or, 15 foot sinking section on one end with a slow sink rate but, when the need arises to present flies deep beneath the water’s surface, he would then choose an intermediate fly line with a fast sink rate.

Then, in addition to floating and sinking lines, floating fly lines are also available with different types of tapers consisting of Double Tapers and Weight Forward Tapers. However, the Weight Forward taper is by far the most popular design today and thus, there are many different types of specialty weight forward tapers ranging from those designed for extra delicate presentations to ultra wary fish to extra heavy tapers designed specifically to work with today’s crop of fast action fly rods.

So, while the information listed above will provide you with a good general overview of the modern art of fly fishing, there is a tremendous amount of more specific information on this particular subject that a novice needs to be aware of in order to become a competent fly fishermen regardless of which environment and fish species they intend to pursue.

But, it is important to keep in mind that no matter where you live, fly fishing is a sport that is accessible to you because any fish species that will strike a lure will also strike a fly and thus, fly fishermen are no longer limited to fishing only for Trout in clear, mountain, streams.

So, if you have ever had an interest in fly fishing, then be aware that due to the evolution of the sport, that there is a fly rod, fly line, and fly pattern out there that will enable you to become a successful fly fisherman regardless of where you live.