Investing in a good strong musky reel can make a huge difference to your fishing experience. Whether you’re going to enjoy your day finishing or leave frustrated and disappointed will depend on the quality of your reel.

Muskies are freshwater fish that require you to use strong fishing equipment. Different to bass or trout finishing, even small muskies can put up one heck of a fight - giving your gear a beating. Hence why you will want a long lasting reel that is capable of tackling their power.

Investing in a good quality reel is one of the best things that a muskie fisher can do, however some people will have different preferences when it comes to finding the right reel. There are a few things to take into consideration: shape, size, design and hand orientation.

But don’t stress. We have caught some of the best in the market and reviewed them. We have also included a handy buyers guide and FAQ section at the end.

Below, we have selected our top pick which will have you fishing happily in no time.

In a hurry?
This is our Winner! 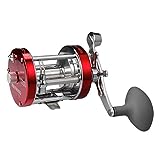 We have chosen the Kastking Rover Round Baitcasting reel as our top pick.

It's a powerful reel with a super carbon fiber drag system which makes it very strong. You will also find that it has a newly designed cymbal washer system with up to 30LB of smooth drag.

This reel is also solidly built with thicker side plates and a CNC machined spool.

Impressively it also has an alloy level wind and stainless steel worm gear. If this wasn't enough to convince you, it also boasts a patented metal idle gear and a stainless steel shaft.

With this reel you are sure to be guaranteed with superior durability.

This reel also comes with everything that you would expect to find on a round baitcasting reel; non-slip EVA grips, a line out clicker alarm and an easy access thumb spool release. 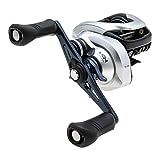 This is the perfect reel to tackle anything freshwater, including big and small muskies.

It's hagane constructed metal reel body makes it durable, stiff and powerful in its performance. It has a 5-8-1 gear ratio and a 30" line retrieve.

It also has a mass drag of 22lbs. Again all features you should be looking for when fishing for big fish.

Impressively this reel also comes with Coreprotect technology, which has built-in water resistance, making it much more durable and long lasting.

Shinano caters to different personal preferences with this reel as it is available in a variety of different sizes.

Our next  pick is the Low Profile Linecounter reel for coldwater fishing by Okuma.

It is built with a lightweight corrosion resistant frame and side plates. It also boasts a balanced aluminum handle arm and a compact ergonomic body giving it a comfortable feel in your hands.

It’s multi disc carbonite drag system is capable of 25 pounds of maximum drag output - which is great when you hook a big fish.

On this reel you will also find Pinion gears and an oversized machine cut XL brass drive.

Next up is the Shimano Corvalus Round Baitcasting reel for freshwater fishing; ideal for musky fishing but it can also be used in saltwater too!

This reel boasts a number of great features for an enjoyable fishing experience.

The body is constructed in a one piece die cast aluminum frame with a variable brake system. This includes super stop and assisted stop features; helping to give you better control.

It also has a non-disengaging levelwind system and the rubber handle grip prevents the reel from slipping from your hands. This will give you more comfort, especially on those long fishing days.

The 400 and 401 sizes in this reel also come with a line clicker. Finally it’s also compatible for use with mono, fluorocarbon and powerpro lines. 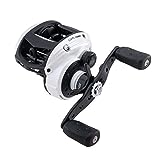 Our next choice for you is the Abu Garcia Toro Beast baitcasting fishing reel.

This reel has been engineered to tackle even the hardest pulling fish; its power stack carbon matrix drag system gives you all the power and smoothness that you could ever need.

This reel is perfect for catching muskies as its Infimax braking system means it is capable of handling larger baits, while also providing you with limitless adjustability.

It also comes with an extended handle for increased cranking power and its X craftic alloy frame makes it both lightweight; for more comfort while you fish and durable to withstand wear or damage.

On this reel you will also find a heavy duty gear design and a titanium coated line guide.

Daiwa provides some exciting features with this reel. From the hyper speed left hand retrieve, to the magforce cast control, everything has been designed to make your fishing more smooth and precise.

It also has a sleek design with an aluminium frame, side plate and paddle handle.

The reel also comes with a 7 bearing system; 2 CRB bearings, 4 ball bearings and 1 roller bearing, helping to give you smooth fishing action.

Buying an effective musky reel is sure to impact your fishing experience. The general rule of thumb when it comes to musky fish - the stronger the reel the better.

However, it is important to know that not all reels are the same. Different brands will offer different features - different sizes, shapes, designs etc.

There are different types of  reels that you can buy and these are listed below.

The most popular reel used in muskie fishing often tends to be the bait casting reel. Level wind bait reels in particular tend to be easier to use and better performers.

Many people tend not to opt for these reels as they appear more difficult to use, however after some practice to familiarise yourself it’s actually a pretty good choice.

Spinning reels are a step up from spincast reels. These tend to be the ones that many people learn to fish with when they were children.

However they are typically not strong enough to withstand muskie fishing. This is where the spinning reels come into play.

They are easy to use and strong. However, some of these reels are light and not capable of holding the weight of a muskie. You will probably want to use a heavy spinning reel.

The only problem with that is using a heavy reel all day can be tiresome.

There are also other features of a reel to consider and these are listed below.

Are you left or right handed?

This is a good place to start when looking for a reel as you will want to purchase one that is suitable for your hand orientation.

The most popular tend to be right hand reels (obviously), however left hand reels are becoming a lot more commonly used now too.

The gear ratio tends to determine how fast you want to move your bait. In terms of muskie fishing, a reel in the mid to low gear spectrum is likely to be more effective.

This is because they are heavy slower fish, so don’t tend to chase quick bait.

When looking for a reel, keep in mind that the higher the gear ratio, the faster the bait will move.

As muskies are large freshwater fish, you will want to ensure that you have equipment that is strong enough to carry their weight.

Sometimes the force of attempting to catch a muskie can result in wear on the reel if it is not strong or durable enough.

Ideally you will want a reel that is hard wearing to withstand this force.

The majority of reels now tend to be constructed with a good strong aluminium body, making them capable of fishing for those large and heavy muskies without breaking after a few uses.

How much you spend on a musky reel is up to personal choice.

Some may shop for one with a certain budget in mind and others may be more open to purchasing those which are more expensive.

Opting for a reel that is of good premium quality is likely to work out better for you in the long run.

Those that are cheaper are likely to wear sooner due to damage to the reel and possible fraying to the line, which could result in a replacement reel being needed.

A good quality and slightly more expensive reel is likely to last you a lot longer before requiring you to spend money on a new one.

What casts further a bait reel or a spinning reel?

The line of a baitcaster tends to spool straight out of the reel and so a bait caster is likely to cast further with more consistency while a spinning reel gets constantly more friction coming off the end of the spool which is more likely to create drag and not as long for casting.

Can a beginner use a musky reel?

It is recommended that a beginner starts using a low cast bait cast reel. This is because they tend to have less issues in regards to the line getting twisted and tangled. This reel can then be used for general fishing if you decide that musky fishing isn't for you.

What is a low profile bait casting reel?

How long will a musky reel last?

The length of time that your  musky reel will last can be very much dependent on the quality of the product that you buy.

You are likely to find that this in a medium to higher price range will be made with a stronger aluminum body which can last a lifetime if you take care of it.

There are some that are at a lower price that are of a good build and quality too if you are looking for a reel on a budget.

Some reels may be more prone to wear than others and you will find some that are a lot more durable than others.

Is a musky reel different to a normal fishing reel?

Yes a reel for musky fishing is a completely different piece of equipment to that used for normal fishing. As a species of large freshwater fish, they can be hard work when trying to catch and therefore a reel that you may use for bass or trout fishing isn’t going to be strong enough to withstand the power of musky fish.

The reels listed are mainly for freshwater fishing and therefore they are strong and durable enough to withstand the force of a muskie fish.