Being able to communicate in an emergency is a “must have” if you want to be able to protect yourself and your family when TSHTF. As a “survivalist” or “prepper” as we’re being called now, we cannot simply grab a cheap handheld GMRS/FRS radio from Walmart and to check the communications box.

You know the ones I’m talking about don’t you? Those little plastic things you buy for twenty bucks from the sporting goods section. Sure they’re fine as a toy for your kid, but I don’t know why people would be ok with one of those if their lives are going to depend on it.

If you do decide to go for the cheap handheld radio option, then whatever radio you use, please take them out and use them in a practical test environment and see how far they get you. I imagine that most of you would be utterly disappointed at their performance and you would rethink your plan to rely on them in an SHTF situation.

What you need is a ham radio that is suitable for preppers.

Why Should You Listen To me?

I’m a ham radio operator of 10+ years, so I’ve been through my fair share of equipment. I’m also active in the survivalist community, I frequent the forums and above all, I have first hand working knowledge of most, if not all of the products I am going to recommend to you today.

Parts of this article may cross over into the gray side of the legalities, but when your ass is on the line, that will be the last of your worries. Now, this is what I would recommend for survival purposes:

I would highly recommend to anyone interested in preparing for survival situations, to get a ham license because it’s not just about getting the license, but in the process of getting said license, you will learn a lot about the science of how the radio works on the inside.

Now don’t let this scare you, you don’t have to be a genius to do it. I studied for a whole two days and went and passed the test, so if I can do it, so can you. So I highly suggest everyone go get their license, it’s fun too and you’ll meet a lot of people.

In ham radio, there are radio clubs out there which specialize in prepping & survivalist stuff, and there’s a huge network of people to help you if you get stuck.

The main reason you should opt for a ham radio is that they are about 10 times more powerful than these handheld ‘toy radios’ that you see in sporting goods stores. Ham radios also have a removable antenna which means we interchange the antenna should we need something a little more powerful. For example, a telescopic antenna that’s a little over three feet long gets me many times the range of the standard rubber duck antenna.

The main benefit I wanted to tell you about today, however, is to do with the radio itself. The ham-radio that I would suggest you buy for the purpose of survival in an emergency situation is the Yaesu FT-60R.

Now, when it comes to comms in an emergency, you want to be able to communicate with your family, friends, neighbors or prepper community. Therefore I recommend that you have a pair of the Yaesu FT-60R’s because in an emergency you’re going to need one and so it the other person.

It’s no use you having the best ham radio for preppers and them having a cheap crappy toy that will drop reception when you need it the most. So be sure to grab two of these beauties, they could save your life one day.

Personally, I have one and one for my wife to use as well, and here’s where we get into the gray area of legality.

It is perfectly legal to modify your radio to transmit outside of amateur radio bands. Now the Yaesu FT-60R is a dual band radio, they talk in the 2-meter and 70-centimeter bands (VHF/UHF) and I have modified mine, which you can do yourself as there is plenty of information online.

Simply put, my radio will now be able to talk to a lot more people than it used to when I first bought it. These radios when modded can talk to just about everyone from 136 megahertz to 174 in VHF and up in UHF from 420 to 470.

That is a heck of a lot of bandwidth and most commercial radios are in one of those two bands. So just to clarify, I’m not advocating breaking the law doing what I just mentioned, it could, in fact, be illegal in your state, however, there is a get-out-of-jail-free card.

Legalities of Ham Radio Use in an Emergency

The FCC has a rule that in the event of an emergency you are allowed to do anything you need to do, in order to get help.

Basically, you can do whatever you want with these radios and if you know what you’re doing you can actually get into police repeaters and Fire Department repeaters etc. I would only advocate this in an emergency and to listen only mode, don’t be stupid and mess with people’s lives of course.

If you get a ham license and you get one of these radios and go about it the legit way and modify the radio so that you can get into these other services if you need to, then should the time arise you will be able to get into:

So these are an enormously powerful tool folks, and it can get you into enormous trouble as well so I’m not advocating breaking the law but I am advocating being prepared with this radio and to have it properly set up ready for an emergency.

It will, hands down, be the best communications tool you can have and it beats a cell phone as cell phones likely won’t work. I’ve been in many situations where they do not work both caused by natural disaster and actually mostly caused by people panicking and overloading the cell phone system.

So these ham radios are very important, if you’re going to spend the money on radios where your life is going to depend on it, maybe the lives of your family, then do not spend twenty dollars for a pair of cheap mini child junk radios.

The Yaesu FT-60R are close to two hundred dollars each, so you need about four hundred dollars, plus extra for accessories like the antennas and that sort of thing. So plan on five hundred bucks, most people spend more of that on a gun, and in my personal option, a decent ham radio is just as important.

The radio I recommend here has a metal frame, is extremely good quality, water-resistant and you can get into any comms channel you wish with these radios. Which is much better if your life is going to depend on it.

One of the best features of this ham radio is that you can take off the antenna and you can put this into my car that would have an antenna on the roof which is bigger and more efficient. This would provide you with a truly mobile unit for comms that can transmit with 5 watts of power and 5 watts is more than enough for VHF and UHF, you simply do not need fifty or hundred watts of power for that.

Having a mobile comms station is perfect for a bug out scenario when you are on the move to escape whatever impending danger is on its way. 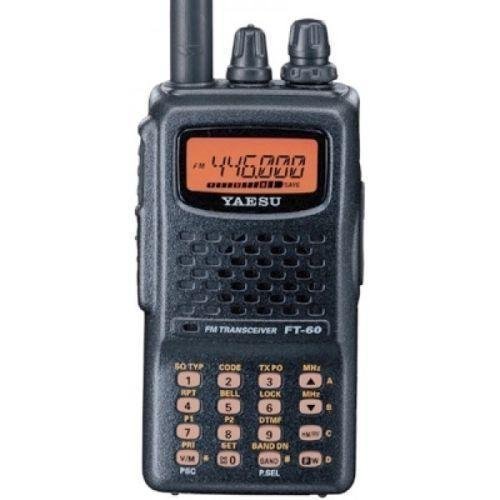 Many people ask how does this compare to the Baofeng 5r+ which seems to be popular amongst newbie preppers and especially those overseas in the UK and the rest of Europe.

The Yaesu is far easier to program with the provided software and is much more robust too, making it one of the best entry level ham radios. I have had a number of Baofeng radios and their build quality is not as good as the Yaesu brand.

Another key comparison point is that the FT-60R has a 5-watt output vs. 4-watt output for the Baofeng.

If you take my advice and go for the Yaesu FT-60R ham radio, then when an emergency arises you’ll have this super radio ready to save your butt. It really is worth spending a couple hundred bucks on these because even when there’s no SHTF event in sight, it sure is a lot of fun to play with.

So to wrap it up, the Yaesu FT-60R is, in my opinion, the best prepper radio on the market and it’s a heck of a lot of fun just for using every day for talking with people when you’re bored or preparing for those dark times. I do hope you got something out of this and if you have any thoughts, questions, or comments, please leave them in the comments box below and stay safe.

Click here for the best price on the Yaesu FT-60R