Which Shooting Rests Are The Best Buys of 2022? A Review & Comparison

The Best Shooting Rests on the Market

Shooting Rests are an important part of sighting in a rifle and also sometimes in shooting it more accurately.

Designed to offer mechanical support to the rifle, and reduce or sometimes eliminate all control over the gun except the trigger, shooting rests provide a stable, repeatable platform from which to shoot from.

Clearly this is the best way to dial in a scope, test the ultimate accuracy of a rifle and to increase the quality of your shooting at the range.

They are also extremely important in developing handloads for your rifle. Knowing how accurate your rifle is will allow you to test loads against known performance, and develop superior loads custom tailored to your particular gun.

Shooting rests range from large stable shot or sand filled bags which you can rest the forend and sometimes butt of your rifle against, to specialized clamping systems that hold the rifle securely in a mechanical framework.

Choosing the best shooting rest is a matter of your end use and final need. Many shooters get by just fine with bags, while others seek more complicated mechanical rests.

In some cases, they will own several different kinds of rests, and bring them out when adjusting sights, testing barrels, or helping friends do the same.

The best thing though, is that choosing the best shooting rest isn’t hard, nor is finding it.  We took the guesswork out of the whole process for you and found five of the best shooting rests on the market. They cover the most popular and common styles and are in price ranges to suit every budget and need.  Take a look and see if you agree! 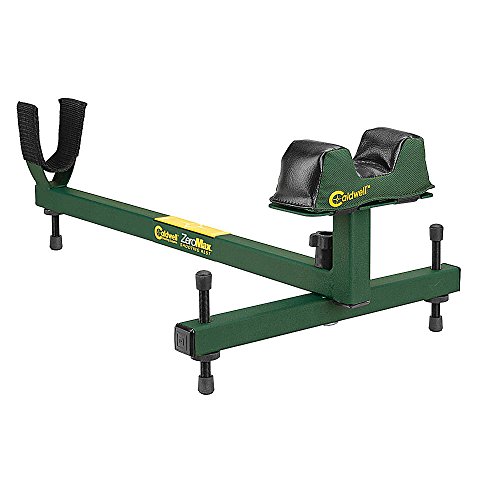 VIEW ON AMAZON
This is a surprisingly affordable and complete shooting rest. The Caldwell Zero max supports the entire rifle and can be adjusted to provide a just right angle and height for your shooting needs.

A must have if you only have a casual need for a shooting rest, or if you are looking for your first one without spending much money.

The Zero Max is a great way to make sure your hunting rifle stays dialed in between seasons, or to take to the range to test the ultimate accuracy of your rifle.

Made of durable steel, with a nylon and leather front rest, and a non marring nylon rest in the rear,  this shooting rest will give you years of durable service in all seasons and weather.

Seriously though, a shade over $30, and you get a complete, solid steel adjustable shooting rest? Heck yeah! At that price they make great gifts to first time shooters, or even get a couple to donate to local youth shooting clubs, and get one for yourself.

A simple rest that manages to offer most common features needed in a shooting rest. Works for me. 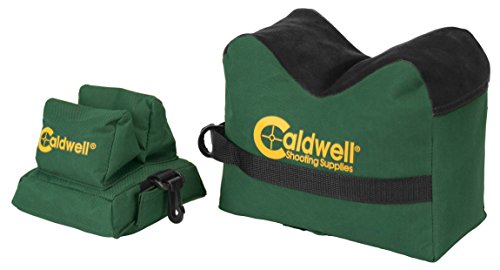 VIEW ON AMAZON
Honestly, more often than not, these are the sorts of rests I like to use for regular bench shooting, especially if my rifle is already dialed in, however there is no reason whatsoever not to use these for an initial sighting in.

Sometimes all you really need is a stable position to put your rifle on, and these do the trick.  Made of tough nylon and rugged leather, these rests ship unfilled, so you can fill them with sand, lead shot or whatever else you may desire.

After all sand is cheap, and shipping is expensive.  What is really nice about these rests is that they are tall enough to even work with many common modern sporting rifles like the AR-15 and similar rifles with protruding pistol grips, which can be a problem with some rests, and as an added bonus they are even designed to clip together after use to be more easily transported as a single unit.

What we’ve got here is about as simple and effective a set of shooting rests that you can and still come out under $20.

If you need a basic shooting rest that won’t even come close to breaking the bank, look no further than Caldwell’s Deadshot Combo. 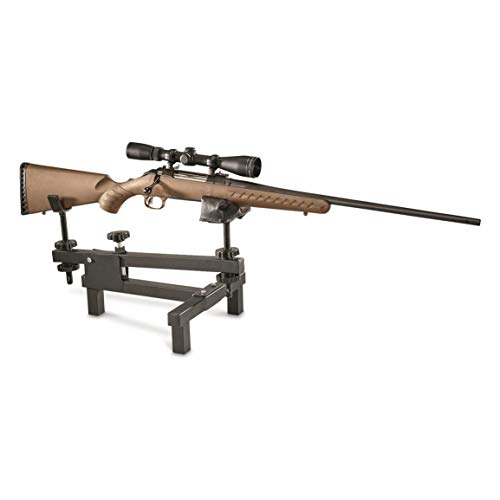 VIEW ON AMAZON
Probably the simplest and most affordable rest of it’s kind, the Guide Gear Bench Rest primarily has price and simple utility to recommend it.

There are nicer rests on the market, and there are shabbier rests too. This one exists in a sort of Goldilocks zone of just right that is neither junk nor top shelf.  However, I am a big fan of “just enough” when it comes to purchasing shooting gear as it is far too easy to get excited over extra features that you might not even use.

Sure it doesn’t have fancy bells and whistles, and yeah if you use it every day hard for a season it will probably leave you wanting something more.

But if you are a person who rarely uses a rest, and just needs it for basic tasks, why spend more money than you need to.

Go ahead, pull the trigger on this if you know it will fit your needs, and use the extra money you saved to buy more ammo or something. 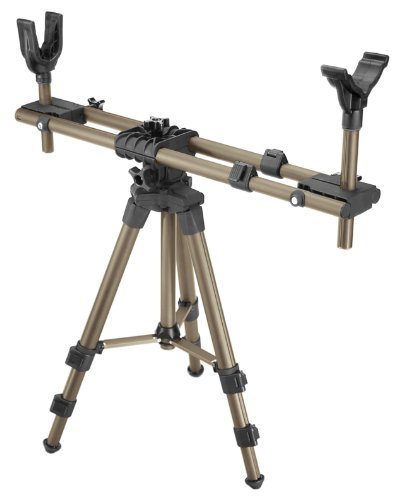 VIEW ON AMAZON
Notice how Caldwell products keep showing up here? Yeah me too, and that’s because Caldwell makes some of the best shooting rests and accessories in the industry, and it is really hard to argue with that kind of success.

The Field Pod is designed with hunters in mind, and will even fit crossbows.  One of the most tedious tasks of hunting from a stationary position or from a blind is having your rifle at the ready all the time. It is far easier to have it in a rest like the Field Pod, ready to use at all times tucked away in your blind.

Weighing just five pounds and adjustable in height from 20-42”, the Field Pod offers a stable shooting platform, while featuring a panning and tilting head allowing you to track game until you are ready to pull the trigger.

Built with crossbow and firearm hunters in mind, you’ll find this highly versatile shooting rest is as handy in the field as at the range.

The Field Pod quickly collapses and folds up into an easy to carry form, and can be transported with minimal difficulty.  Surprisingly affordable, if you hunt from a blind you’ll welcome this shooting rest on your next hunting trip. 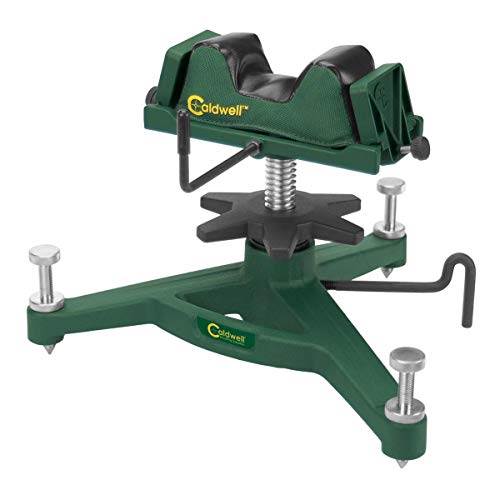 VIEW ON AMAZON
Made of over fifteen pounds of rugged cast iron, with adjustable spiked feet which make it as useful for a bench as shooting in the field, The Rock is a mammoth creation built for punishing use.

About as literally rock like as you can get without using a boulder, which quite frankly would be a lousy shooting rest, this offering from (you guessed it) Caldwell is a hardcore shooting rest for the most dedicated and demanding of shooters.

Made of over fifteen pounds of rugged cast iron, with adjustable spiked feet which make it as useful for a bench as shooting in the field, The Rock is a mammoth creation built for punishing use.

Even the cradle that holds the sturdy padded rest can be adjusted with tensioning screws, ensuring as little movement as possible on the rest.

Buy this bad boy if you do serious prone shooting outdoors, or simply need your own personal portable mountain of a rest.

Ideal for serious target shooters, or the most dedicated of hunters, The Rock will give years and years of reliable service and stand up to regular hard use.

I’d buy this if I was serious about precise shooting with heavy recoiling magnum rifles, or like taking really long shots that require as much support as possible to make.

Rests like the Field Pod and The Rock are highly specialized tools that may not be suitable for what somebody else needs, while a pair of sand filled bags may be the greatest thing in the world for somebody else.

Broadly speaking, we can separate shooting rests into two categories;  rests that provide a framework to support the entire rifle, or simpler rests that only support part of the gun, and each have their pros and cons.

Fully supporting rests are designed to take as much guesswork out of the process of aiming your rifle as possible.

They provide a platform with multiple points of mechanic adjustment and cradle the entire rifle in their rigid frame. These are fantastic choices for the most precise forms of sight adjustment and for shooting a rifle to the maximum potential possible.

They will provide a solid, stable platform for the rifle’s forearm to rest on, while carefully cupping and supporting the buttstock, thus minimizing the impact of handling errors by the shooter.

They would be my choice for testing handloaded ammo as well, because you will really need to see the absolute best performance of a rifle to determine the true extent of the accuracy of a given load.

In other cases, we may only want to support part of the rifle, or may wish to use sandbag style rests. My go to shooting rest is little more than a sandbag like the Deadshot boxed combo we looked at earlier. I rest my rifle on it, and go to town.

Rarely do I use the second bag that supports the buttstock, but it can be quite handy to have on hand, particularly if shooting a heavy recoiling rifle, or testing for maximum accuracy.

Building off the idea of supporting the front of the rifle, we see rests like The Rock and similar which provide optimal mechanical support for the front end of the gun, while giving more control to the shooter over how they support and hold the rifle.

But deciding which of these types is the best really depends on your shooting style and needs. One of the most common uses for a shooting rest is to zero in a scope or sights, and really when used with care, even a simple rest will be more than adequate for that task.

Perhaps the best choice to make is to get one of each (after all, for the most part these things are pretty affordable).

There is something to be said for grabbing a couple of fancy sandbags and tossing them in the range bag for an afternoon of fun, and something equally good to say for being able to stick a rifle in a fully supporting rest and very carefully try to wring more accuracy out of it or test new handloads for their maximum potential.

Regardless of what you need a shooting rest for, choosing the best one will add a whole new element to your shooting.

When used for hunting, you may stand a better chance at successfully harvesting game, or simply find your time in a blind is a bit more comfortable.

Difficult shots may become easier, and you can find yourself enjoying the quiet tedium that comes from staking out a stationary position a bit more.

There are an awful lot of choices on the market, but as you’ve seen they tend to take just a couple basic forms. Look over these highly rated shooting rests, find the one or two that suits your particular needs best and enjoy!