Choosing The Best Frontside Skis For Your Needs – A Review & Comparison

While most people would assume that a ski is a ski unless you’re an athlete they couldn’t be more wrong. The best frontside skis allow you to ski like a professional.

They have narrower waist widths that range between 85mm down to 72mm and are designed to carve up harder snow and make both short radius and long arc turns.

Most have a construction that’s a lot like racing skis since they have a full wood core with vertical sidewalls and titanium sheets to reinforce them.

The skis also have a slight rocker at the tip and a lot of camber underfoot which makes them much more dynamic for turns.

Choosing the best frontside skis is a lot like choosing any other ski in that you’ll want to find something that fits your weight and height appropriately.

You should look at how responsive they are, whether they’re stable and grip the edge and if they’ve got good carving pleasure. You want your skis to be good value for money so the best frontside skis are designed for fast skiing and great turn shape versatility.

The narrow waist design of these are often pretty similar and they’re ideal for any resort terrain which can make choosing hard. These are designed to go really fast so if you’re not an experienced skier you probably don’t want frontside skis.

However, that’s not saying front sides can only go fast, many are designed for the technical skier in mind and will have a decisive limit on their speed.

The key to getting the right skis in this category, if you can’t test, is going to be knowing your style.

Many people just think frontside = fast, but the truth is that these days there are also some technical additions creeping in that lack the speed but are better fitted for skiers who sometimes want to take it easy.

With four sizes available these are ideal for both men and women. They’ve got a full-length Titanium Layer and a sandwich sidewall to give them great strength and flexibility.

They have an amazing edge hold and good dampness so that you can perform with confidence. This is designed for aggressive skiers and has smooth control in the turns.

The wood core is a combination of poplar and microcell plastic which helps to give it that springy feel. The larger size has a radius of 15m.

These are brand new for this year and so far are considered some of the best skis that Dynastar has ever produced by anyone who has tested them.

With great stability and a confident edge, these are ideal for people who want to go fast. They’re fun to ski on and have smooth transitions between turns so that they handle well. Ideal for fresh corduroy these hug the turns like a Porsche.

There’s an active suspension design which helps absorb vibration and they use the Konnect dual bindings. They have a nice playfulness to them and come in a good selection of sizes.

They’re wicked fast, almost to the point of being too fast, they are suited towards experts. The length is also a little short even for their long version at 182cm.

These could afford to be a little bit longer, especially if you’re a tall person. These are also only designed for grooming snow which limits their versatility a bit.

At around a hundred more than the Dynastar, these have a lot of similarities. These are full-throttle skis which are more adaptive with great torsion so that you’ve got smoother turns and a great edge that will work for both racers and technical skiers.

They’re very powerful and more stable than the Dynastar’s even with the extra power.

They rip easily through short and medium turns and will burn up ice under the chair. They have a similar sandwich construction using a single titanium layer and they’re well balanced.

These are well built for bigger skiers and will help to roll into longer turns. They have a cascade tip and a slight rocking with a flat tail.

They also feature Rossignol’s Prop Tech which is three cuts in the ski forebody for a better flex.  These have a 19m radius.

With a standard Konect Binding and four sizes, these are some of the best carving skis around thanks to their curvy sidecut.

They’re nice and stable too and will go very fast on groomed snow. They’re responsive and easy to turn.

The carbon base is nice and light and they’ve got a power turn rocker to get a little extra push.

These have a little more dampness than is ideal and it really hurts their versatility. These are best for groomed snow and need to be driven to get the best results.

These are really limited in their design though because they’re not versatile at all and not as playful as the Dynastars either.

These are racing skis, plain and simple and not designed for playing about in the snow. 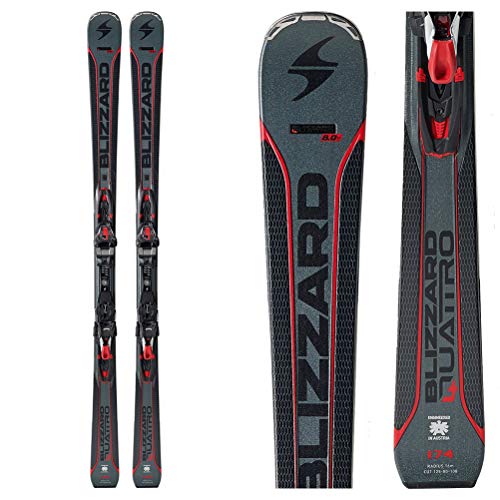 This model is due for an update pretty soon but it’s still a viable choice. It has a 3 matrix sidecut design with a smaller radius that makes it more versatile than the Rossignol.

These are great for hard snow and have an 81mm waist with IQ bindings. These have a 2mm rise with twin tips, a full wood core, and dual titanal layers.

The sidecut design creates a variety of radii so that you’ve got a dynamic ski that is both solid and predictable while still able to punch in the power and go fast.

This gives a lot more relaxed feel compared to the Rossignol or the Dynastar that has good carving performance but will let you get off of the groomed slopes a little.

The tip and tail are both rockered which makes it great for powder but still able to deal with hard packed or ice.

With a nice early rise, these are smooth both in and out of the turn so that you can carve effortlessly. It has a wicked edge and will go plenty fast but still allows you some leeway to relax.

These have been designed as a compromise between the Blizzard Magnum designs so that they’re both strong yet powerful and a shape that works to various turns.

The camber has good contact and connection and the 181 length needs you to push it to really get how powerful they really are. It’s stable and a good improvement on the previous 8.7 while being significantly cheaper.

Where this ski really fails is the flotation, it’s rather awful. It’s versatile but far from suitable on all occasions.

While it’s not the top of the athletic spectrum these still need the finesse that an advanced skier uses on the piste to be worth the money.

These definitely need a stronger skier too as they are power based. 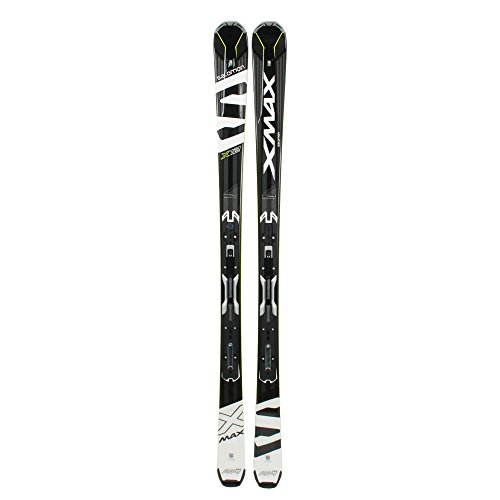 A versatile ski that can take on long turns and short carves and works great on its edge. The ski is responsive and ideal for technical skiers and intermediates.

It’s very precise and while powerful enough that you’ll need to be a strong skier for them to be worthwhile but they’re not for speed freaks.

These perform best when they’re on edge and work great with short carves or long arc turns.

The control is great and they’re perfect on a variety of snows but will be unsuited for flat skiers or racers.

The flotation isn’t great but they’re light and built with the Powerframe system for energy transmission through top to tail and a carbon fiber body reinforced by rubber for a snappy and acceptably damp feel.

The tips are Koroyd which uses air pockets to provide reduced weight.

A perfect multi-radius ski that works great at a tilt and can still arc tightly. It’s reactive and energetic with good ride quality.

They’re grabby and a good all-around choice. They have the XT12 Ti proprietary binding already installed and they’re not overpoweringly fast or restrictive. They’re good and stable and designed for grooming.

These are great for technical skiers but a poor choice for anyone else, they’re not designed for speed and the grabby feel can be a pain when tuning.

They don’t pick up easily even though they’re strong and will struggle on powder.

The biggest downside to these is that they’re not going to cut it for experts who want to go fast, they’re great skis but just not quite there enough to really reach the top of the line.

While these are the most expensive they’re also the newest – literally brand new for the 2020 season and the new top of the line frontside from Blizzard.

They’re very similar to the X Power in construction but infinitely better in performance.

This is part of their new Make Your Mark designs and provides great stability and a clean edge. It’s not the fastest and the X Power is definitely faster but it’s quite versatile like the Salomon.

It’s not as playful as some but it’s powerful, stable and has a good rocker profile. They’re quite wide in the waist for a frontside ski.

They have a sandwich design that’s wood, titanal and carbon that has a little flex to it.

As an overall ski, these are ideal for intermediates. They’re no race ski but have plenty of edge and power that can be used at a better speed than the Salomons.

The waist on these is pretty wide in comparison to most of the others and it’s more aggressive than the Ti so it needs more expertise.

The titanal layer also gives them less of a flex which means they’re suited for more advanced skiers too. There’s also an extended binding plate which helps give quick energy transfer for better precision.

If you’re not keen on the wise waist there’s also the RS version which only has a 72mm waist.

They fall down on playfulness and they’re also only limited in their sizes so if you want shorter skis these are not going to work (I.e for most women).

They’re pretty stiff thanks to the thicket titanal layer and if you have a tendency to relax into the backseat your skis will let you know you’re not doing the job.

It’s a really tough decision to actually come up with “the best frontside skis” between all of these. The Quattros are so new that very few people have really gotten the chance to see how they work and the Salomon’s are limited unless you’re a technical skier.

If you’re looking for fast and furious speed however, the Dynastar Speed is just the clear winner. They’re going to go fast, fast, fast and none of the others can keep up.

Even though the Blizzard is designed for perfect frontside conditions it just doesn’t feel like it has the edge when it comes to speed, especially from that smaller radius and a wide waist.

The best frontside skis are probably the Dynastar because nothing matches the speed unless you’re a technical skier, in which case the best is likely to be the Salomons as they’re the most versatile.