With its long-range stopping power, great accuracy, amazing ballistics and decades of standardized military and civilian use, it is no wonder the .308 cartridge and rifles chambered for it are among the most popular in the world.

For the sake of simplification, we are going to largely gloss over the ancient confusion between 7.62 NATO and .308 except to note that a .308 chambered rifle can shoot either round. There. Done.

Either way, the .308 is an incredibly popular round, and all sorts of rifles are built for it, from entry level hunting bolt actions to precision match grade semi-autos and pretty much everything else in between.

This classic round has earned a place in the heart of the American shooting public. A truly near universal centerfire round, it can be found in the hands of law enforcement, security professionals, hunters, and all manner of target shooters.

It is a safe bet that wherever an effective, powerful and accurate round is called for, you can find the .308 in service.  However, this can also make picking the best .308 rifles hard, especially because it is quite possible to buy rifles that even out of the box are suitable for every single role the .308 plays.

Thanks to modern manufacturing methods, one can buy match grade rifles for around $1,500 or less from companies like Savage and Ruger, entry level bolt action rifles can be had for less than $300 or so, and the increasingly popular .308  AR style rifles are dropping in price as their popularity grows.

In other words, not only is there a .308 rifle for every budget, it is also going to be a quality, straight shooting rifle.  To help you along in choosing a rifle, we picked five of the best .308 rifles on the market, with something for everyone, from entry level hunting rifles to match grade precision weapons.

It is really easy to get excited about a .308 rifle and scope combo for under $350. Even more amazing is when it ships with a perfect for hunting 3-9×40 scope, a pillar bedded action and free floating barrel and an adjustable weight trigger.

Add a 22-inch long target barrel, and you have an absolutely amazing combination at a winning price.

Modern computerized manufacturing methods and use of weatherproof synthetic stocks have combined to drive the prices of solid bolt action rifles down and drive quality and features up.

If you are in the market for a first hunting rifle, a good .308 target shooter, or simply are looking for another toy to play with, the Remington 783 is a great choice.

Packed with traditionally high dollar features, this out of the box combo will let you enjoy a semi-custom gun straight from the factory for about the cost of a tablet computer. And let’s face it, a tablet is nowhere near as entertaining and useful as a fine bolt action rifle.

Check out the 783. Just a few years ago a rifle this full featured would have cost about twice as much, now it’s an entry level factory option, making it a difficult to beat combo.

Click here to view the best price for the Remington 783

The classic .308 semi-auto rifle, the M1A1 is a faithful recreation of the famous M14 rifle of early Vietnam War fame. An upgraded version of the venerable M1 Garand, this is arguably the defining .308 rifle in America.

Suitable for hunting, sports shooting, or tactical operations, this finely crafted rifle is as much at home on the firing line as it is in the rugged outback or in the hands of a SWAT sniper.  Despite AR type and similar rifles being available to the consumer for over half a century, there is still a powerful demand for a more “traditional” looking rifle with the warm feeling of a wood stock with a basic form that goes back over a century.

The Springfield M1A1 gives you all the utility of a semi-auto rifle and variable capacity removable magazines while still providing that pleasing and sometimes sadly politically safe aesthetic of a more traditional rifle.

Built to time-proven designs that have served America’s armed forces since WWII, you will be proud to own and shoot an M1A1.

Click here to view the best price for the Armory M1A1

With the commercial success of the Ruger Precision Rifle, several other companies have brought their own similar offerings to market, none finer than perhaps the Tikka TSR-1.  The Finns take their accurate rifles very seriously and long have a heritage of building highly refined and accurate weapons, and the TSR-1 is no exception.

Built to feature guaranteed MOA accuracy in three shot groups, featuring a special M-Lok compatible aluminum chassis with upper and lower Picatinny rails, adjustable length folding stock, semi-heavy target barrel, adjustable weight trigger, and a removable ten round steel magazine this is a rifle that can do nearly anything you ask of it.

The Scout Rifle concept was invented by the famed shooter and rifleman Jeff Cooper in the early 1980’s.

Refined through study at his Gunsite training course, the scout rifle concept evolved out of the idea that a modern bolt action rifle did not differ much in form or function from those used by skilled hunters and military a century prior, and that with modern metals and optics, a light, handy rifle could be created that was a nearly universal rifle, suitable for most hunting tasks or specialized combat roles.

The end result was a light, easy handling .308 bolt action rifle with a long eye relief scope mounted over the barrel.  Easily invoking the romantic ideals of the American hunter or skilled rifleman, the scout rifle has become a popular concept.

Ruger’s offering, licensed by Gunsite itself is a fine example of such a weapon. Featuring an adjustable rubber butt pad, a ten round removable magazine, muzzle brake and extra long forward Picatinny rail, this rifle does exactly everything Cooper had hoped for from his scout rifle design, which makes it, hands down the ultimate .308 bolt action rifle. 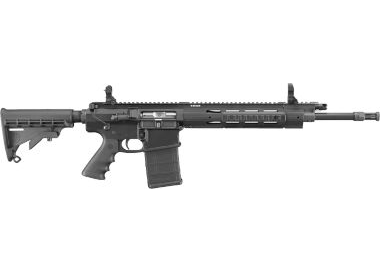 As the market has become saturated with AR-15 style rifles, gun owners are increasingly looking to their bigger .308 chambered big brothers for a higher powered rifle with similar controls and features the venerable AR-15.

Ruger has set the standard for these .308 AR’s with the impressive and feature rich SR-762.  While most .308 AR style rifles have traditional gas impingement systems, the SR-762 uses a special two piece pistol and has a four-way adjustable gas block, ensuring this rifle can function with basically any ammo.  Shipping with a chrome plated lightweight fluted barrel and bolt assembly, special flip down backup sights, three Magpul 20 round mags, Magpul pistol grip and stock, special Ruger designed handguard with a top Picatinny rail, and room to add more rail sections to the sides and bottom as needed, this is perhaps the most advanced .308 AR style rifle on the market today.

Aggressively priced to compete with other top tier .308’s, this rifle is a must have if you are in the market for a state of the art semi auto .308.  Odds are you already have an AR-15, and owning its big brother in the form of the SR-762 makes perfect sense. Check it out, you’ll love it.

We’ve taken a look at five of the best .308’s on the market right now, but how does that help you better choose which one you need? As you can see, the .308 is a highly versatile cartridge and the available rifles reflect that. Many .308 rifles cross several boundaries and can serve as a target, hunting, and even tactical rifles.

One minor point of confusion we touched on earlier is that there is, in fact, a distinction between .308 Winchester and 7.62 NATO cartridges. While based on the same parent case, the .308 Winchester can develop higher chamber pressures than 7.62 NATO.

While many rifles are built to handle .308 specs, there can be rifles built out of military surplus parts that are chambered and designed for 7.62 NATO.  Long story short, unless the rifle is clearly marked for .308, run the lower pressure 7.62 NATO ammo in it. All the rifles we examined here today are built for .308 Winchester, ensuring you can shoot either .308 or 7.62 ammo in it.

Choosing the best .308 rifles then boils down to your end use.  The two most common for most people are target shooting and hunting, and there is certainly a market for tactical style rifles. Now, if you’re looking for your next favorite handgun, check out our guide on 9mm handguns here.

While it is pleasant to purchase a fancy tactical looking rifle and enjoy it for the cutting edge technology and rugged designs that come with that market, the reality is outside of law enforcement or security professionals, tactical is just another word for “that is a really cool rifle!” which of course is a perfectly valid reason to buy one, even when the reality is for nearly every purchaser, a tactical rifle will only see paper and perhaps game animals.

For hunting, really any .308 rifle you can comfortably carry into the wild will do the job. For states with hunting laws that restrict magazine size, there are smaller capacity magazines available for removable magazine rifles, leaving the primary consideration one of fitting a rifle to your budget and personal comfort.

I for one have never been shy about hunting with an AR style rifle, but for the traditionalists, an M1A1 or a scout rifle would also be marvelous hunting rifles.  Too, we have seen there are incredible bargains on entry level bolt action rifles that are more than suitable for hunting most North American game.

In the target world, there are a great many out of the box match grade rifles, such as the Tikka Precision Rifle,  as well as special match versions of the M1A1. You will get superior accuracy out of a bolt action rifle, but for certain shooting sports, a quality semi auto will do the job or may even be required.

Here too, in some cases, these rifles cross over into the tactical world, because an easy handling, highly accurate rifle is as useful in the hands of a police sniper as they are in a deer hunter.  For the person who likes the utility and romance of a rifleman’s rifle, it is hard to beat the Gunsite scout, which brings together a nearly perfect package of performance and reliability and at an affordable price.

In the end, the best .308 rifle depends as much on your wallet as your sense of aesthetics, what sort of action you like shooting, and sometimes just what else you want to add to the safe.

The .308 Winchester is a cartridge that only grows in popularity each year and can be had in every form from inexpensive ball ammo to precision crafted match grade ammo.  In nearly any commercial form, the best .308 rifles are capable of serving as an everyman’s rifle regardless of its primary purpose.

The all around high performance of this cartridge ensures that rifles built around it will meet any legitimate use the round might have and are limited only by operator skill and perhaps the presence of a few custom or semi-custom touches.  The best .308 rifle becomes the one that you don’t want to put back down after you pick it up.